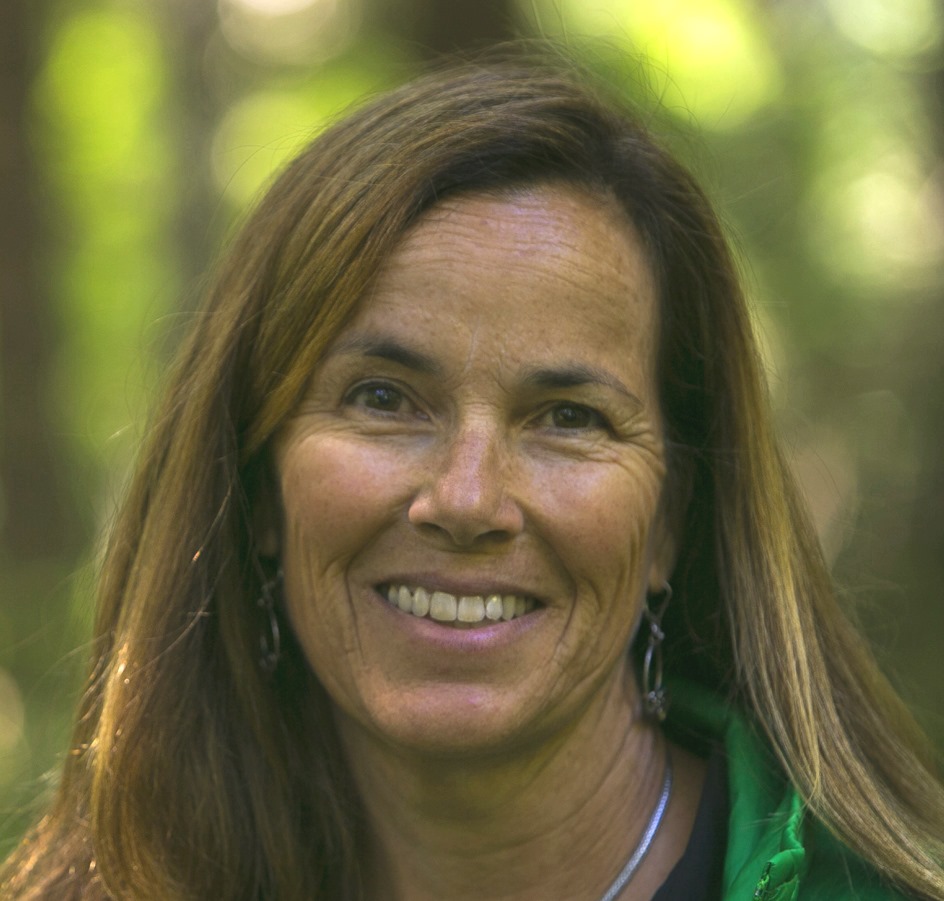 With climate change, drought, and forest fires on the march, the beaver is now being celebrated as our best partner for cost-effective stream restoration, protection of cold water, creator of riparian habitat, and natural builder of highly effective firebreaks. It is quite a comeback for this tenacious animal, which was almost extinguished from the American landscape to provide felt for hats for European heads and as a means for territorial expansion and resource exploitation by the English, French, Russians, and others.

Beavers significantly modify and maintain habitat and ecosystems, creating biodiversity hotspots.  In addition to damming streams, beavers remove trees, enhance tree species diversity, and create snags, all of which attract insects and wildlife.  Beaver lodges provide refugia for fish, homes for muskrats, mink and otters, and some birds nest on top of the lodges.  Given this impact on the ecosystem, it is hard to overestimate the extent and the impact the trapping of beavers had on the ecology of western landscapes.  The North American fur trade for European consumers– with beaver pelts at the center – was one of the main economic drivers in North America, starting in the 16th century and peaking in the 19th century.  Having exterminated beaver in Europe, European trappers almost succeeded in exterminating an estimated population of 60-400 million beavers in North America.  By the time later settlers arrived, they encountered a landscape that was profoundly transformed by the absence of beavers, and considerably impoverished ecologically as a result.  By 1850, beaver were locally extinct in many regions throughout North America. 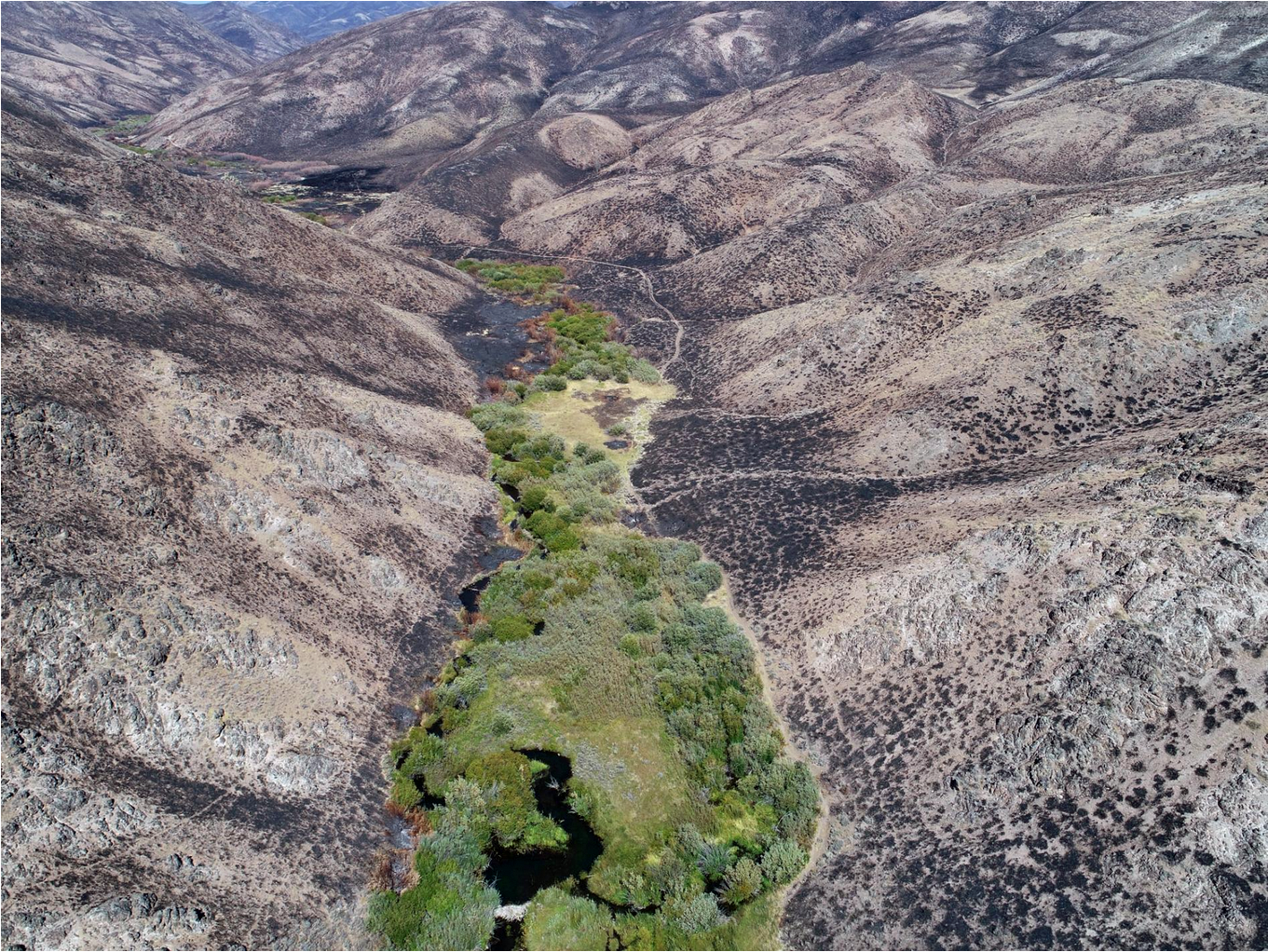 This photo of Baugh Creek, Idaho, illustrates how a string of beaver ponds in a barren, post-wildfire landscape, serve as wildlife refugia and potentially as firebreaks. 1

Recognizing both the ecological benefits that beavers provided to streams and fisheries, as well as the potential future economic benefit of healthy populations, the remaining fragile populations of beaver were protected and, as the numbers grew, beaver were reintroduced across the continent, including being dropped by parachute in remote locations.

Recently there has been renewed interest in beaver ponds as natural firebreaks.  After a beaver dam has been established, stored sediment eventually turns the pond created behind the dam into a marshy meadow, saturating the soil and often stopping fires from advancing.  In addition, beaver ponds serve as a fire refuge in which plants are protected and animals can shelter.  In a study2 reviewing fires in California, Colorado, Idaho, Oregon and Wyoming, riparian zones with beaver present were three times less affected by fires compared to riparian zones without beaver activity. 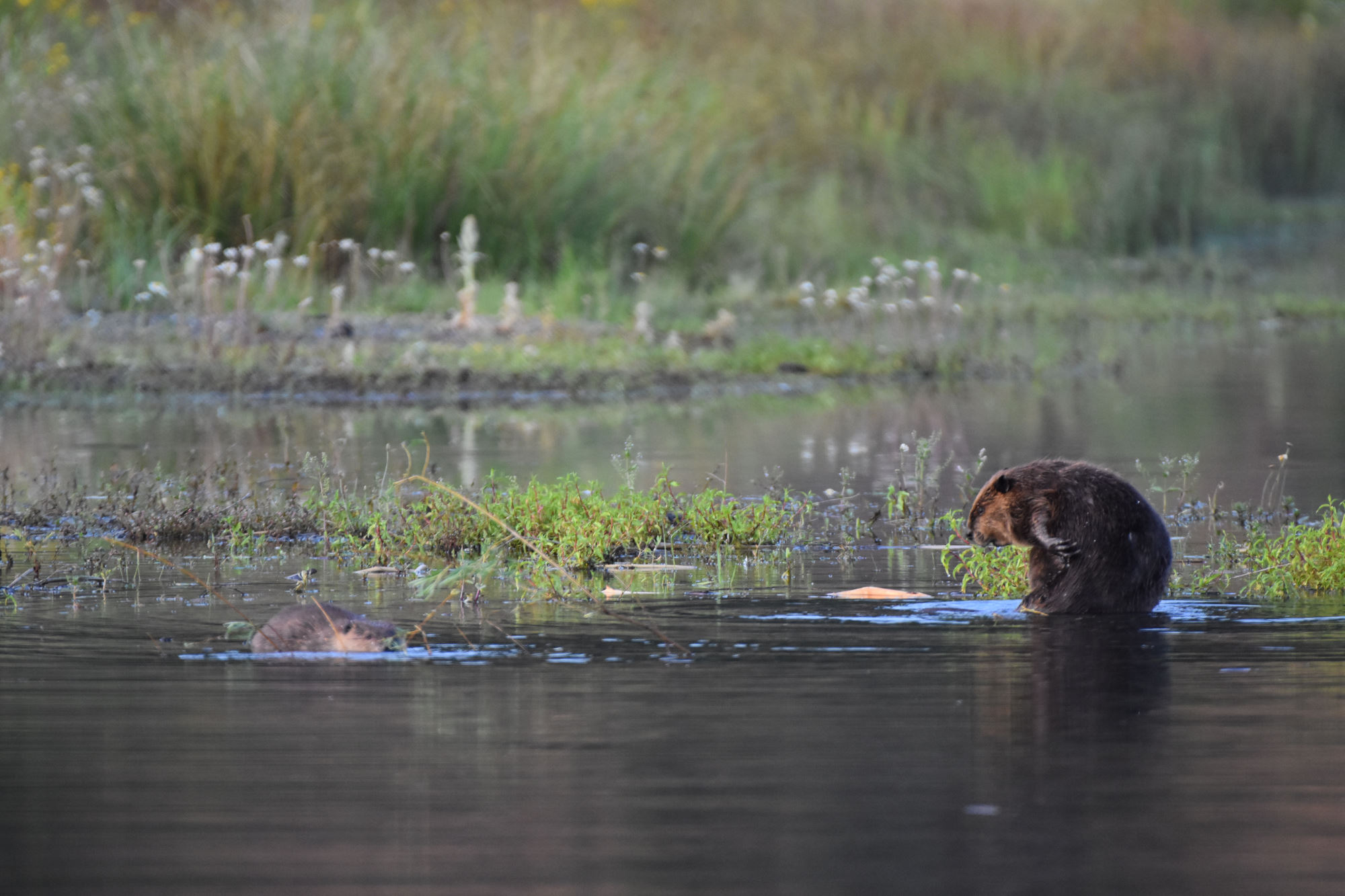 A mother beaver and kit in Scott Valley California, where EFM collaborates with partners to create conditions that will attract and retain beaver. Photo courtesy of the Scott River Watershed Council.

At EFM we are very fortunate to have conservation partners that are leading efforts to attract and retain beavers on the landscape.  Among these is the Scott River Watershed Council (SRWC), based in Etna, CA, with whom EFM has partnered extensively on restoration of the Scott River Headwaters property.  Since 2014 SRWC has been building beaver dam analogues (BDAs), human-constructed dams that raise water tables and improve aquatic health in an ecosystem severely damaged by mining and other activities, with a goal of creating conditions that attract and retain beaver.  In 2018, SRWC started a phased project to restore Patterson Creek, one of 13 creeks that flows through the EFM managed Scott River Headwaters property.  SRWC estimated it would take a decade before conditions improved sufficiently to sustain beaver.  In the fall of 2020, we were delighted to learn that beaver had taken up residence in the restored portion of the creek, ten years before predicted!